5 Reasons To Raise the Minimum Wage in PA

Posted on February 10, 2016 by womenslawproject

This week, the Keystone Research Center released a new policy brief underscoring the economic benefit of raising the wage in Pennsylvania. The report’s authors estimate a minimum wage increase will increase state tax revenues by $121.5 million and generate another $104 million in savings in reduced Medicaid spending. 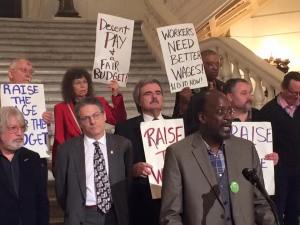 Sam Jones of Restaurant Opportunities Centers United calling for one fair wage at the Capitol. (Photo via @RaisetheWagePA)

The report also notes that increasing the minimum wage pushes more families from the range in which the state pays nearly half the cost of Medicaid (48% in 2016) into the range in which – under the Medicaid expansion program – the federal government pays most or all of the cost. A minimum wage increase to $10.10 per hour would shift an estimated $104 million in Medicaid payments from the state to the federal government.

Pennsylvania would additionally benefit from a $10.10 minimum wage increase because the resulting increase in wages and incomes would generate an estimated $121.5 million more in state income and sales tax revenue.

Here are 5 more reasons to raise the minimum wage:

One: It would help close the significant racial and gender pay gaps: Women make up the majority of the minimum wage workforce. Of that population, women of color are disproportionately represented.

Two: Since minimum wage employees working full-time and year-round in Pennsylvania earn just $14,500 per year, a single parent with two children working full-time still falls $4,000 below the federal poverty line. Increasing the minimum wage to $10.10 per hour would boost annual full-time earnings by $5,700 to $20,200, enough to pull a family of three out of poverty. 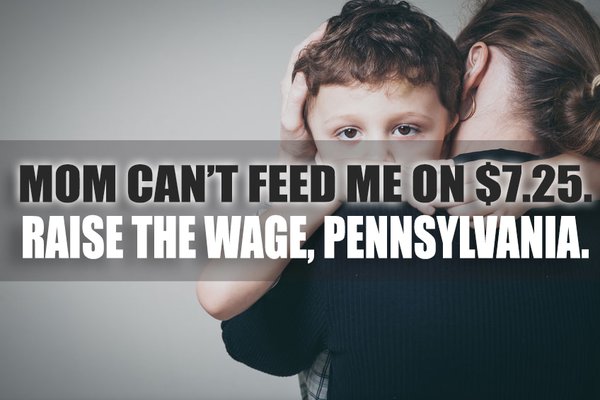 Four: The Economic Policy Institute (EPI) estimates that if the minimum wage were gradually increased to $10.10 per hour beginning this year, by 2016, over 1 million Pennsylvania workers would get a raise. Of the total affected workers, about 607,000 (57 percent) are women.

Five: Research shows the subminimum wage is linked to sexual harassment. Women living off tips are roughly twice as likely to experience sexually harassment than women in states that pay the full minimum wage to all workers.

Meanwhile, at least nine bills have been introduced in the Pennsylvania Legislature that would raise the minimum wage.

The PA Campaign for Women’s Health, a growing coalition of more than 50 organizations calling for an end to ideological politics trumping common-sense policy solutions in Pennsylvania, currently advocates for bills that raise the minimum wage to $10.10 per hour, and the subminimum wage to 70-75% of that rate.

Participate in advocating for equality: Sign up for our Action Alerts here.

Stay up to date on issues and policy by subscribing to our blog, signing up to receive our Action Alerts, following us on twitter and liking us on Facebook.

The Women’s Law Project is the only public interest law center in Pennsylvania devoted to advancing the rights of women and girls.

The Women's Law Project creates a more just and equitable society by advancing the rights and status of all women throughout their lives. To this end, we engage in high-impact litigation, advocacy, and education.
View all posts by womenslawproject →
This entry was posted in Raise the wage and tagged female workers, minimum wage, PA Campaign for Women's Health, Poverty, Raise the wage, Raise the Wage PA, Sexual harassment, women workers, workplace equality. Bookmark the permalink.