Posted on October 29, 2015 by womenslawproject

Thirty-seven years ago this week, President Carter signed into law the Pregnancy Discrimination Act (PDA), an amendment to Title VII of the Civil Rights Act of 1964.

The PDA prohibits employers from firing, demoting, refusing to hire, or otherwise discriminating against a woman because of her pregnancy, childbirth, or related medical conditions. It states that employers must treat women affected by pregnancy, childbirth, or related medical conditions “the same for all employment-related purposes … as other persons not so affected but similar in their ability or inability to work.” The intention was to bring Title VII closer to meeting its goal, which Justice Brennan noted in his  dissent in General Electric Co. v. Gilbert, 429 U. S. 125 (1976), as being to

The PDA has improved the workplace for women. Nevertheless, as more women have entered the workforce—in part, due to the passage of the PDA–it’s become clear that the PDA alone is not sufficient to protect the rights of pregnant women in the modern workplace. 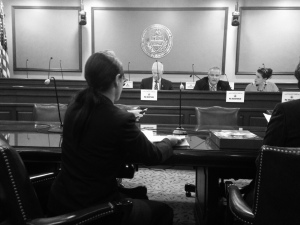 Workplace accommodations is a particular area of concern. While amendments made to the Americans with Disabilities Act in 2008 fills in some of the gaps left by the PDA, it’s still insufficient. Often, the women who have called the Women’s Law Project for help are having healthy pregnancies and need only minor accommodations, such as a chair for sitting or permission to carry a bottle of water at work. When bosses refuse to make these minor accommodations, women are forced to choose between a healthy pregnancy and keeping their job, right when they need it the most.

Without laws that increase and clarify existing protections for pregnant women in the workplace, employers are likely to continue to deny requests for minor job modifications to accommodate pregnancy, and pregnant workers will continue to be forced to work in hazardous conditions or unjustly pushed out of their jobs. Unemployed, they lose their income and employer-provided health insurance and other benefits.These women are at risk for reduced income for the rest of their lives.

We need new legislation that will meet the goals of the PDA.

On the federal level, Senators Casey (D – Penn.), Shaheen (D – N.H.) and Ayotte (R – N.H.) and Representative Nadler (D – N.Y.), have introduced the Pregnant Workers Fairness Act, which would require employers to make reasonable accommodations to employees due to pregnancy, childbirth, or related medical conditions unless the accommodation imposes an undue hardship on the employer.

On the state level, the General Assembly should pass the Pennsylvania Pregnant Workers Fairness Act (HB1176). The PPWFA is part of the PA Agenda for Women’s Health, a legislative package designed to address women’s health and economic security that is supported by the bipartisan Women’s Health Caucus in the state legislature. Sponsored by Rep. Sheryl Delozier (R-Cumberland), the PPWFA would require covered employers to make reasonable accommodations related to pregnancy, childbirth or related medical conditions unless those accommodations would prove an undue hardship on the business. At least 15 states have already passed similar legislation.

Earlier this month, the Pennsylvania House Committee on Labor & Industry Committee held public hearings to explore the PPWFA. The hearings also explored The Sanitary Conditions for Nursing Mothers Act (HB1100), legislation that would help salaried women not covered by the Affordable Care Act and require their employers to provide break time and a private, sanitary space to express breast milk (small employers who are able to prove that this minor accommodation would be an undue hardship would be exempt).

The two-hour public meeting  went well: It revealed the opposition’s lack of a convincing argument against closing the gaps in workplace protections for pregnant and nursing workers in Pennsylvania.

Amal Bass, staff attorney at the Women’s Law Project, testified in support of the legislation alongside Katja Piguar, director of Breastfeeding Services for Maternity Care Coalition and Lisa McCloskey, RN and executive committee member of the Pennsylvania Breastfeeding Coalition.

“With H.B. 1176, Pennsylvania has the opportunity to clarify pregnant workers’ rights and employers’ obligations in a way that protects women and their families while utilizing a legal framework that minimizes the burden on employers,” testified Bass.

The opposition, namely the Pennsylvania Chamber of Commerce, argued that passing these bills will confuse business owners by creating new, conflicting regulations that will invite opportunists to file frivolous lawsuits. But as Bass pointed out, one analysis revealed that reasonable accommodation legislation led to a decrease in related lawsuits, precisely because this legislation clarifies employers’ obligations and workers’ rights.

Bass made another salient point: just because this legislation is new to the Pennsylvania Legislature, doesn’t mean it’s actually new. The PPWFA merely extends protections already available to workers in Philadelphia and some Pittsburgh workers, thanks to local ordinances. We believe all Pennsylvania workers deserve equal protection under the law.

The Pennsylvania Pregnant Workers Fairness Act is supported by the PA Campaign for Women’s Health, a group of more than 40 organizations calling for evidence-based policy and real solutions to real problems faced by Pennsylvania families.

Stay up to date on this topic, the PA Campaign for Women’s Health, and policy related to the status of women and girls in Pennsylvania by following us on twitter and tumblr and liking us on Facebook.

Founded in 1974, the Women’s Law Project is the only public interest law center devoted to women’s rights in Pennsylvania. WLP is a founding member of the PA Campaign for Women’s Health, a growing collaboration of organizations and individuals calling for an end to ideological politics trumping common-sense policy solutions in Pennsylvania.

The Women's Law Project creates a more just and equitable society by advancing the rights and status of all women throughout their lives. To this end, we engage in high-impact litigation, advocacy, and education.
View all posts by womenslawproject →
This entry was posted in pregnancy discrimination and tagged Equality, PA Agenda for Women's Health, Pennsylvania, Pennsylvania Campaign for Women's Health, pregnancy discrimination, Pregnancy Discrimination Act, workplace equality. Bookmark the permalink.