PA Renews Effort to Keep Politics out of Healthcare

Posted on September 30, 2015 by womenslawproject

Doctors Shouldn’t Be Forced to Lie to Patients

Across the country, politicians have been quietly passing laws and regulations that either coerce doctors to mislead their patients—and in some cases, outright lie—or alternatively, gag them from having truthful conversations about their patient’s health. Politicians have even used legislation to coerce doctors into performing medically-unnecessary procedures—such as is the case with bills that mandate transvaginal ultrasounds before performing an abortion.

The 2014 report “Bad Medicine: How a Political Agenda is Undermining Women’s Health Care” by the National Partnership for Women & Families revealed that at least 33 states have passed these government medical interference laws in recent years. With today’s re-introduction of the Patient Trust Act by Rep. Dan Frankel, D-Allegheny, Pennsylvania has the opportunity to lead the country by stating unequivocally that politicians should stay out of exam rooms. 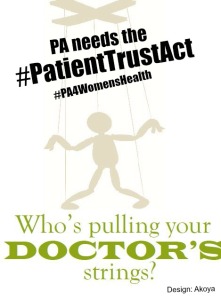 Pennsylvania has the opportunity to lead the country by stating unequivocally that politicians should stay out of exam rooms.

“Doctors aren’t dummies. They don’t go to school for all those years so they can be forced to provide medically inaccurate information, or perform gratuitous procedures in order to satisfy a politicians’ desire to control the medical decisions of private citizens,” said Tara Murtha, Communications Chair of the PA Campaign for Women’s Health, a diverse statewide advocacy campaign of more than 40 organizations across the state supporting the legislative Agenda for Women’s Health and the values and issues it is centered around.

As an example of government interference in medical advice in Pennsylvania, Frankel points to Act 13 of 2012, legislation that many fear will limit the ability of health care providers to discuss the potential harm of chemicals involved in natural gas fracking with their patients.

Another example is a Florida law, heavily lobbied for by the NRA, which prohibits a doctor from asking a patient about access to guns in the home, despite the fact that the American Academy of Pediatrics considers a doctor asking this type of question as a best practice for protecting children from risk of accidental gunfire in the home when firearms are improperly stored.

Five states have passed laws requiring providers give patients information unsupported by scientific data about a supposed link between abortion and breast cancer, although the American Cancer Society has repeatedly stated that there is no such link.

“Patients trust that their doctor is telling them the truth, the whole truth, and that their health is the doctor’s primary concern. We should protect that trust,” said Frankel, who co-chairs the Women’s Health Caucus. “Patients shouldn’t worry that they are on the receiving end of a political agenda when they go to the doctor.”

House Bill 1105, known as the Patient Trust Act, is a primary focus of the General Assembly’s Women’s Health Caucus, which formed with the goal of turning around the state’s appalling record on women’s health by promoting evidence-based health policy, eliminating workplace discrimination, and other initiatives aimed at advancing women’s health.

The Women's Law Project creates a more just and equitable society by advancing the rights and status of all women throughout their lives. To this end, we engage in high-impact litigation, advocacy, and education.
View all posts by womenslawproject →
This entry was posted in Patient Trust Act and tagged Government Interference, PA Agenda for Women's Health, PA Campaign for Women's Health, Patient Trust Act, Rep. Dan Frankel. Bookmark the permalink.
%d bloggers like this: